Prof. S. N. Patek, Ph.D. is the Hehmeyer Professor of Biology and a Bass Fellow at Duke University. Patek received an A.B. with honors in Biology from Harvard University followed by a Ph.D. in Biology from Duke University. Patek was a postdoctoral fellow at the Miller Institute for Basic Research in Science at UC Berkeley.   Patek has received many honors, including a Guggenheim Fellowship, the George A. Bartholomew Award for distinguished contributions to comparative physiology, and a fellowship at the Radcliffe Institute for Advanced Studies at Harvard University.

Dr. Suzanne Cox, Ph.D. received a B.S in Physics and B.A. in Philosophy from the University of New Hampshire, a BFA in Sculpture from Massachusetts College of Art and Design, a masters in Philosophy from Brown University, followed by a Master in Mechanical Engineering and phD in Organismic and Evolutionary Biology from the University of Massachusetts, Amherst. Cox was a postdoctoral fellow in the Rubenson Muscle Function and Locomotion Lab at Penn State and the Daley Neuromechanics Lab at the University of California, Irvine. Cox was awarded an OpenSim Visiting Scholar position at the National Center for Simulation in Rehabilitation Research at Stanford and is a founding member of the Comparative Neuromuscular Biomechanics working group of the International Society of Biomechanics.

Associate in Research and Lab Manager:

Ben Schelling attended Dartmouth College, receiving a B.A. in Biological Sciences and Environmental Studies. While at Dartmouth, he worked as an undergraduate research assistant under the direction of Dr. Anne Kapuscinski. He helped test the implementation of experimental fish food for Nile Tilapia (Oreochromis niloticus) using macro-algae supplemented diets, aimed to reduce phosphorus pollution from aquaculture farms. Additionally, he worked in Dr. Celia Chen’s Lab as a part of the Dartmouth Toxic Metals Superfund Research Program, investigating the impact that various environmental factors have on the biomagnification rate of MeHg from contaminated marine sediments through estuarine amphipods (Leptocheirus plumulosus). Most recently, he completed an internship with the Food and Agriculture Organization of the United Nations where he calculated the greenhouse gas emissions from the world’s small-scale fisheries.

Jacob Harrison attended the University of California Santa Cruz where he received a B.S. in Marine Biology and a B.S. in Molecular, Cellular and Developmental Biology. While at UCSC, Jacob worked as an undergraduate researcher in Dr. Rita Mehta’s lab researching the scaling of dentition and diet in the California Moray.  Jacob’s research focuses on the development of elastic systems.

Justin Jorge received a B.A. in integrative biology from the University of California, Berkeley in 2017 where he worked in Dr. Mimi Koehl’s lab to investigate the biomechanics of single cell predators feeding on choanoflagellates. Justin’s research focuses on ultra-fast movements in nature, specifically those of trap-jaw ants and seed shooting plants such as the witch hazel.

Donovan Hardy received a B.S. in Chemistry from Morehouse College. While at Morehouse, he worked as an undergraduate research assistant in the Socha Lab at Virginia Tech under the direction of Jake Socha and Mary Salcedo. While at Virginia Tech, he helped design and build a system to non-invasively detect dorsal heart pumping in darkling beetles using infrared sensors. Additionally, Donovan worked as an undergraduate research assistant in the Mendenhall Smart Biomaterial and Functional Tissue Engineering Lab at Morehouse College. There, he worked under the direction of Samina Yasmeen; assisting with spectroscopic analysis, modeling, and synthesis of a novel, thermosensitive antioxidant-laden hydrogel to combat the degradative effects of osteoarthritis. His research interest is in the cross-section of material science and biomechanics.

Sophie Hanson received a B.S. in Biology and minor in Environmental Science & Policy in 2022 from Duke University where she studied both population genetics and comparative biomechanics. At the Duke Marine Lab, her undergraduate thesis focused on population genetics of short-finned pilot whales in the western North Atlantic. At the Patek Lab, she has completed two multi-semester-long projects: the first analyzed temporal kinematics of snapping shrimps’ rapid claw closure in varying temperatures and the second explored hybrid metachronal propulsion in mantis shrimp across different swimming behaviors. Sophie continues to seek a deeper understanding of biomechanical systems paired with hydrodynamics to study locomotion.

Arianna Buchanan is studying Sociology and Biology. Her years of fish keeping and interest in marine animal care led her to the Patek lab, as an aquarium care assistant.

Grace Chung is studying Biology and Environmental Science with a concentration in Marine Science and Conservation. Her interest in marine ecology and biomechanics led her to researching snapping shrimp claw kinematics in the Patek Lab.

Ziyao (Richard) Cui is studying Computer Science and Statistics. He loves conducting interdisciplinary research and applying Data Science to other areas of interests. His passion for biological springs and ultrafast movements led him to Patek Lab where he will be working on measuring the elastic properties of spring structures using digital image data collection and analysis.

Yasuhiko Komatsu is studying biomedical engineering with plans to specialize in bioinspired engineering. His interest in nature observation and biomechanics led him to the Patek Lab where he studies development and kinematics of spring-driven strikes in snapping shrimp.

Katie Meehl is a Biology major with a Marine Science and Conservation minor. She is interested in medicine, ecosystem health, and animal morphology, leading her to the Patek Lab where she will be studying the muscles in the raptorial appendages of arthropods.
Vihaan Saharia is planning to major in Electrical and Computer Engineering & Computer Science, with a minor in Finance. His interest in video and image analysis led him to the Patek Lab where he is working on digitizing high-speed videos of ultra-fast animal movements such as mantis shrimp strikes.
Emma Shuppert  is majoring in Marine Science and Conservation with minors in Environmental Sciences and Policy and Biology. She has always been interested in marine life and during her time at Duke has started to learn more about conservation and policy related to the ocean. She hopes to use a combination of these three areas in her future career. Her love for marine life drew her towards the Patek Lab, which ultimately allows her to further explore her interests in marine sciences.
Alina Yin is studying Computer Science and Statistics. Her interests in data processing and analyzing natural phenomena using digital tools led her to the Patek lab where she will be working on digitalizing videos on ultra-fast animal movements. 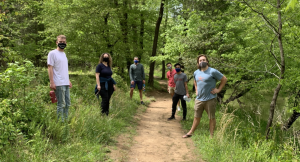 Former lab undergraduates who continued on to graduate school (not a complete list):